Geothermal and Underground Wonders… and the Zorb

We left the Coromandel peninsula and headed south for the town Rotorua which sits between the east and west coasts on the southerly part on the north island. Rotorua is known for two things. First, the town sits within an old caldera which is still an intensely active geothermal area and is affectionately called “fartopolis” because of the stench of all the rising sulfur gas. There is a large lake, with a lava dome island in the center, that is largely fed by geothermal hot springs. Hot springs of boiling water and mud can easily be found throughout the town and there is a rich and recent history of volcanic eruptions from the active volcanic peaks that sit on the edge of this caldera. We were told by locals that it isn’t at all uncommon for a homeowner to wake up to a new “pool” in their yard that has opened up and sports bubbling and stinky mud or water. Some homes we walked by on the way to town actually had harnessed the water or steam to heat their houses or pools. The second thing Rotorua is known for is adventure “sports” venues. Zorbing, Bungy, Giant Swings, Skydiving, Luges, Jet Boats, and other activities are plentiful in town, not unlike Queenstown on the south island. The main business in Rotorua is tourism and we heard languages from all over the planet. 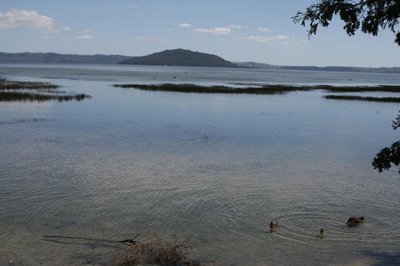 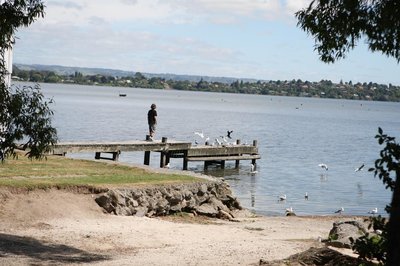 Our Holiday Park in Rotorua was quite nice and featured (surprise) hot springs right on site. We don’t know if that was accidental or not. There were three pools that were fed by geothermal springs, all cooled to different temperatures, and there was a geothermal creek bordering the park. There was also a natural “steam cooker” where you could cook vegetables, right from a steam vent. We didn’t do this, but in retrospect wish we had. The park was pretty fragrant, but we didn’t notice it after a while.

We took some time to walk to the Rotorua museum which was only a few kilometers from our holiday park. The museum was long ago used as a healing spa where natural sulfur and mud baths would nurse virtually every skin or orthopedic ailment back to health. The museum sat within a gorgeous park with beautiful rose gardens along the banks of Lake Rotorua, next to a giant thermal pool that fed the lake. It was stinky – but cool, highlighting the geography of the area, the history of the building, and featured a special exhibit dedicated to the New Zealanders who fought in World War II. Being a tourist town, there were awesome restaurants and many hotels within walking distance. 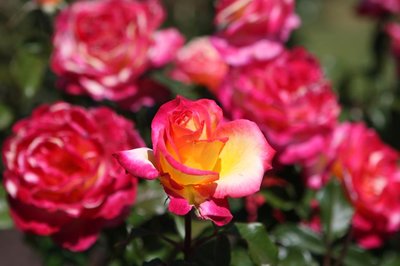 We actually came to Rotorua to experience something Parker had read about called “Zorbing”. Zorbing is a pretty cool experience that I must say isn’t like anything you’ve likely done before and apparently is only done in Rotorua. A Zorb is a giant air-filled ball about 10 feet tall, that suspends another giant ball within it. Through the wonder of air tight zippers, and 1,000 rubber bands, the inner ball stays in the center of the outer ball. There is a hatch that allows you to climb into the inner ball, and you can choose to either be strapped onto the wall of the inner ball, or float freely within it along with about 20 gallons of water. Why in god’s name would you climb inside a Zorb? The Zorbmeisters push you down a giant hill and you roll all the way to the bottom. Zorb Rotorua has straight line and zig zag tracks and when the ball rolls down the hill, you are bounced and spun about like a pair of tennis shoes in a dryer. It’s fun to do and it’s pretty fun to watch as well. We did it alone, with each other and no one got as much as a scratch. 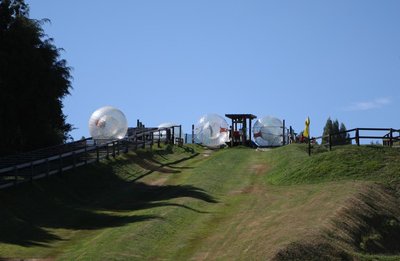 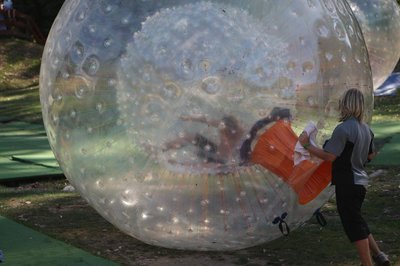 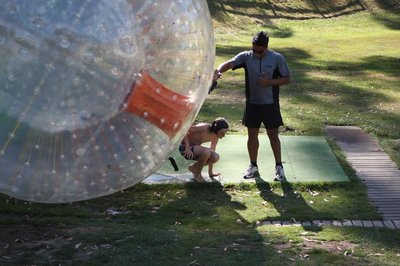 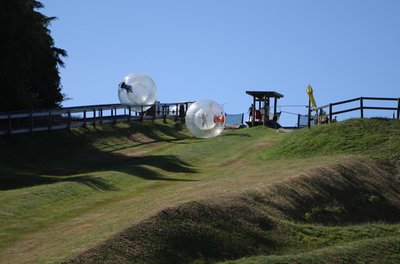 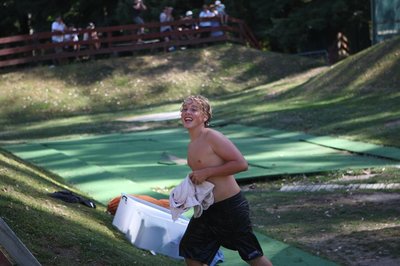 We had intended to pull up our poll tents, and move to Waitomo, only 120km to the west, but we decided to take a bus and return that same day. Waitomo is famous for its beautiful caves and a phenomena known as glow worms. I won’t go into in detail, but suffice it to say that these little critters actually “glow” a phosphorescent green, hang on to the ceiling of the cave, and attract food with the little light. In a pitch black cave they look like stars on a moonless night. Did I mention that the caves are filled with water? I didn’t think so. They are, and we had a few choices to make about how we would view these caves. You could abseil, (rope slide), into the caves, climb and swim the caves (with an inner tube), float the cave in a boat, or walk on an elevated path. Because Griffin was under age, Carol and Griffin took the boat, and Parker and I chose to climb-swim. Both the experiences were very cool. We all wished that Griffin and Carol would have done the climb-swim experience because Grif was easily a strong enough swimmer. We had to squeeze through water filled tunnels, jump off little waterfalls and float in our inner tubes through the caves. We had on 5 mil wetsuits and even with those on, it was very cold – and extremely dark. The only illumination came from the glow worms and the lights on our helmets, (which got pretty banged up on the sides of the caves. It was a blast and a real wonder. The caves were carved from under water rivers, not from volcanic activity. In some places, there were water holes that reached to the surface from 180 feet below, and it is not unusual for these holes to simply “open up”. Carol and Grif’s tour guide told them that they had to remove a cow from the caves a few days earlier because the cow fell into a new “sink hole” falling to it’s death. That same tour guide told of a good friend of hers that had a pretty little pond on their property, and one morning they awoke to find their pond replaced by a giant sink hole. It is even said that farmers (the entire cave area is covered by grazing lands) can’t stand sink holes because they lose cows. They just lose em… 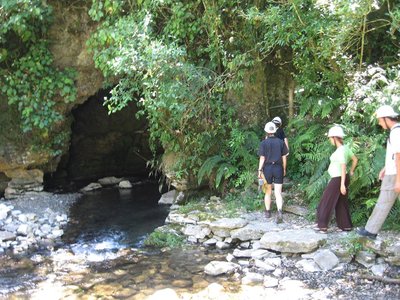 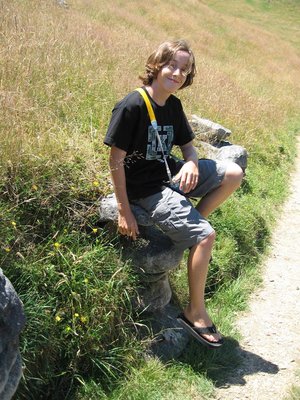 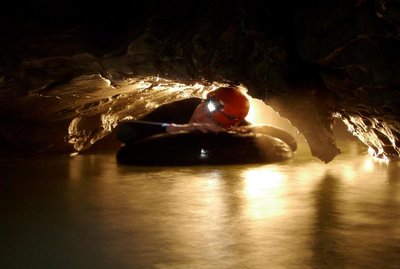 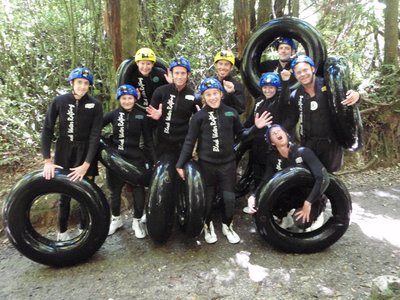 We left Rotorua and headed south for our next destination. On the way there, we stopped at a national park called Wai-O-Tapu only 50 km outside of Rotorua which stands for ”sacred waters” in Maori. It is a pretty big park, but the geothermal touring area is only 18sq km. We had heard that a geyser spouts at 10:15 each day so we arrived right around then to see this. We toured the park and watched the geyser unload in front of an appreciative amphitheatre. The 18 sq km were very desolate and it looked like a moonscape, but only steps away was lush forest. The colors of the waters were pretty incredible, and some of the thermal pools were huge. The touring path needs to be moved relatively often because craters open up and swallow it. The geyser actually had to be prompted by one of the park rangers to shoot into the sky. He did this by throwing a few soap bars into the geyser mouth to release the surface tension in the water below, which is something that Old Faithful does all by itself. We asked the park ranger later in the day what the differences were between the two. He told us that besides being about the same size, and having the same amount of water, there are some technical differences that allow old faithful to erupt predictably, while this geyser requires prompting. I won’t go into the details here, but suffice it to say that we appreciate old faithful much more than we did in the past. 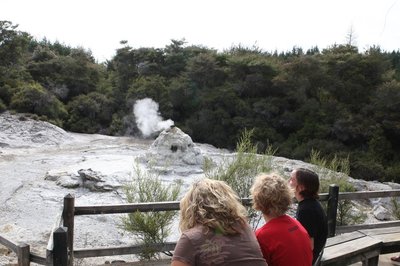 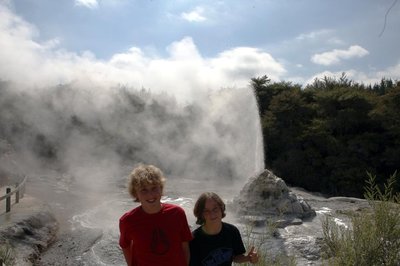 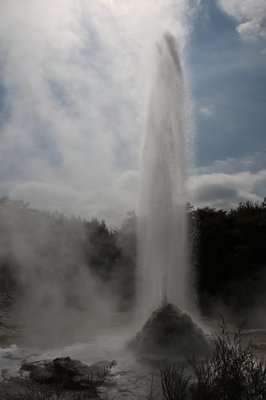 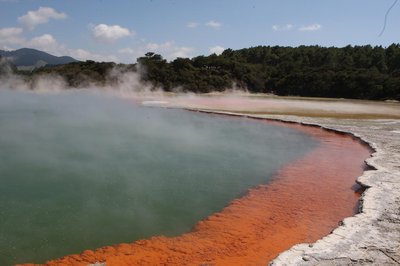 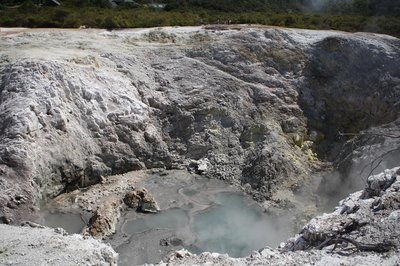 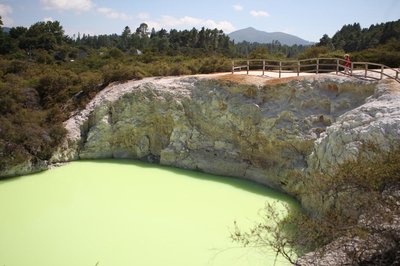 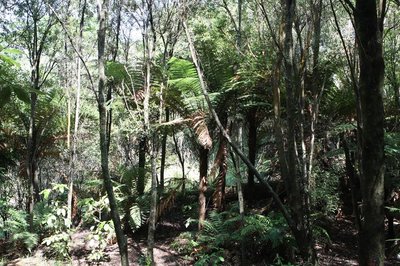 What adventures! I would not have liked the cave tour at all! But it sounds like it was just right for you 4. SLO will seem very tame when you finally rest your bones there. It looks to me like the boys are growing taller! Love, Mom