Finishing off the North Island

After viewing the geyser at Wai-O-Tapu, we took a short two hour drive south to Lake Taupo and stopped for lunch. Lake Taupo is huge, deep, crystal clear, and absolutely gorgeous. Hard to believe, but it is larger and deeper than Lake Tahoe. Lake Taupo was a volcano at one point just like Lake Rotorua. When Taupo exploded 18 thousand years ago, it covered New Zealand in a hundred of feet of ash, and the ash even covered Australia. You can see the thick layer of ash in the river beds and on canyon faces. The magnitude of the explosion was apparently 100,000 times larger than Mt St. Helens. The Tongariro National Park borders the south shore of Lake Taupo and contains within it a chain of jagged and ominous peaks that stretch to 7,000 feet and offer a spectacular and foreboding view from the Lake. One of these mountains you might recognize as Mount Doom from Lord of the Rings. We ate lunch in the little town of Taupo which sits on the northern shore of the lake to take in the views.

After lunch we intended to head down to Tongariro to hike the Tongariro crossing, a 17km tramp across the park that is widely believed to be the best one day hike in New Zealand, trekking through shale desert, glaciers, forests, and calderas. However, after we ate lunch and strolled the Taupo town center, we enquired about the “crossing” and were told that “in this heat” the trek would incredibly hard and a very fit employee in a sporting goods store told us that even he wouldn’t do it in heat like this. Completely coincidentally, (I swear this was coincidence), it turns out that a race was being held at the Taupo race track. It wasn’t a little race you would expect to fit the size of the town, but rather, a series of races including the New Zealand Porsche GT3 Cup, the New Zealand V8s, and the A1GP international formula race, which had just received Ferrari sponsorship. This was the real deal. We decided to stay in town to check into our options. It seemed there was much to do. We stayed at a great big holiday park that had, pools, saunas, trampolines, and other little things the kids loved. By the end of the day, we decided to ditch the hike. Carol, Parker and Griffin would go white water rafting, and Blake would go see a day of racing. It was a qualifying day at the track so the crowds would be small. 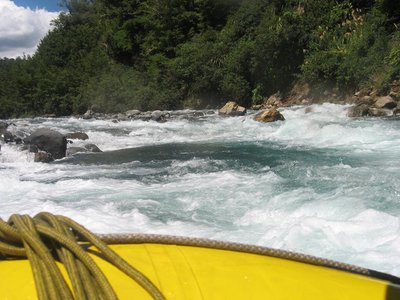 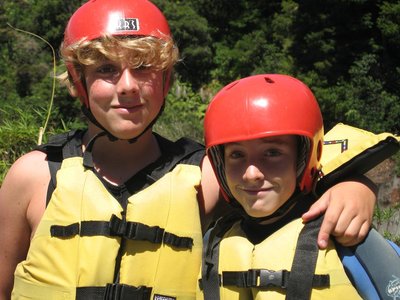 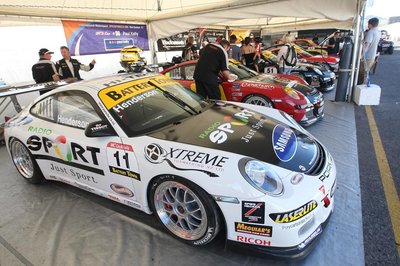 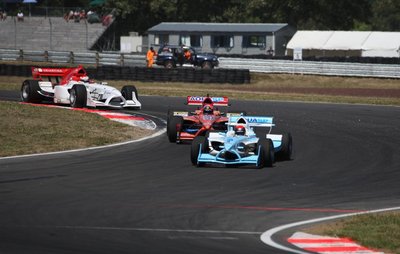 That morning Blake hitch hiked to the race, and Carol and the boys were picked up at the holiday park and driven to Tongariro area for their rafting trip. The day was awesome for everyone, with Blake squeezing past security into the Porsche Paddock, and Carol and the boys squeezing through some Class 3 rapids that were a whole lot of work. The raft didn’t flip, but the kids and Carol described some close calls and heavy paddling to keep the raft upright. It was pretty hairy. Carol said the water was crystal clear and she saw trout in the water the size of large salmon. Sorry Mike Hillygus, they didn’t catch, nor release any.

Wellington
After Taupo, we drove about 400km to Wellington, which is on the southern tip of the North Island. The landscape changed through this 400km dramatically. The highways on the north end of the North Island wind their way through dense forests while the south end of the island reminded us at times of the high desert, and at other times the rolling hills of Ireland, and at even other times the lave fields of Hawaii. The roads were never wider then two lanes, and our little camper van was passed by cars and trucks with reckless abandon. We were treated to awesome coastal views as we approached Wellington and you could see the mountain ranges of New Zealand’s South Island in the distance. We pulled into Wellington and decided to stay at a hotel in the middle of the City so we could experience the downtown area. We were only in Wellington for two nights, but we didn’t want to have to take a bus in from a holiday park outside the city each day.

We loved Wellington. It reminded us all a bit of the Seattle downtown, and maybe even a little of Hong Kong, but it was infinitely more approachable and walk able. It had a great water front, wonderful family amenities, fantastic restaurants, a museum, sail boats that dotted the water front, a working harbor with sturdy ships, all framed by hills punctuated with Victorian homes that complemented the modest skyline. It also had a killer skate park right in the heart of the city. We really liked this place. We also lucked out as the weather was wonderful. 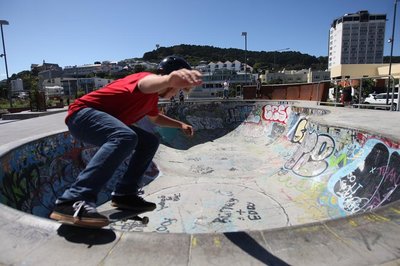 Ferry to the South Island 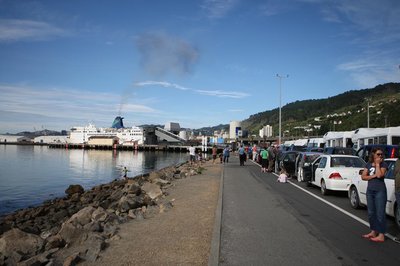 The last morning in Wellington, we gathered our things, moved back into the motor home, and drove to the ferry terminal which we would take to the South Island. We were in a long line of Camper Vans and cars that were using the sole four wheel connection between the north and south islands. There were campers, buses, horse trailers, and even Ferraris piling onto the Ferry for the 3 hour ride between the North and South Islands. The ferry was large, comfortable and had pretty much every creature comfort you would want - on a ferry. The weather was wonderful, the seas were calm, and a penguin paddled into Griffin’s view. Perhaps some good foreshadowing for the South Island? We sat on the outside deck of the boat at a table and absorbed some sun and the magnificent view as the North Island shrank in the distance and the South island rose before us. 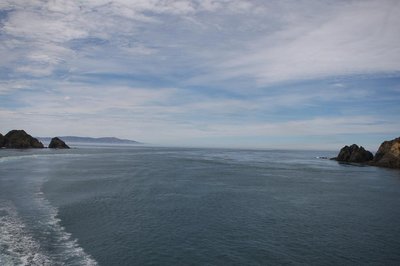 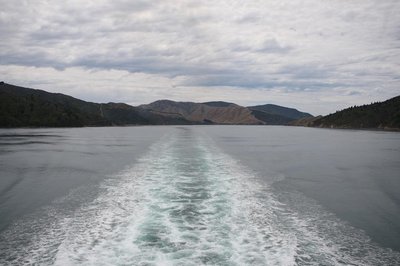 I remember talking to you, Blake, before you went to the races, and Carol & the boys went rafting. I love the picture of Parker & Griffin on the water. What a beautiful place this has all been.
Grandma