A brighter shade of gray

We had heard from folks over the years that Prague is perhaps the prettiest city in central Europe, largely because it was left virtually untouched by the heavy fighting and bombing that blanketed much of Central Europe’s big cities. It is true. Prague is Beautiful. Prague has not only managed to preserve the historic buildings and streets that wind through the city, it seems to have done a good job of delicately hiding decades of soviet rule and under-investment. It certainly isn’t Western Europe, with the obvious signs of capitalist growth and investment over those same decades, but perhaps this is also one of the reasons Prague seems so unique. The architecture in Prague is breathtaking; from Medieval castles to Art Nouveau building facades to completely modern structures. We were more taken with architecture here than anywhere else we’ve traveled. Once courageous colors wash ornate building facades, squeezed together by narrow and meandering cobbled streets. A comprehensive electric tram system (that is more functional than timely) carries visitors through these beautiful streets, the main corridors of town, and over the main geographic feature of Prague, the Vlatava river. 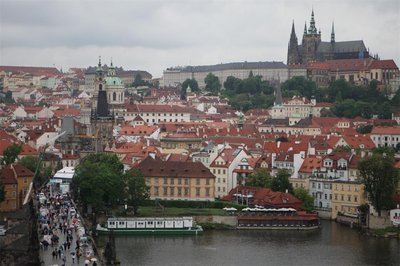 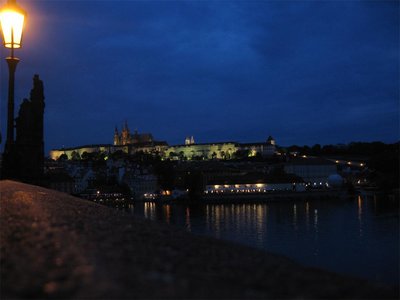 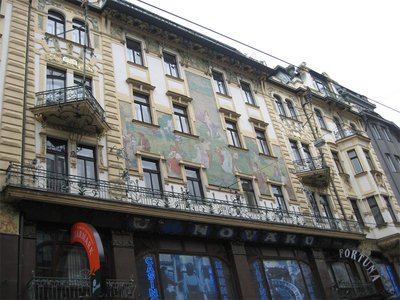 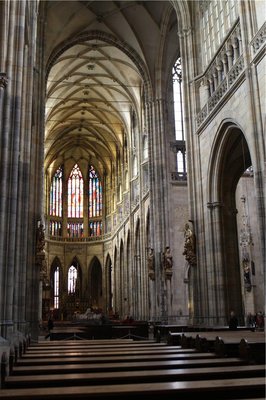 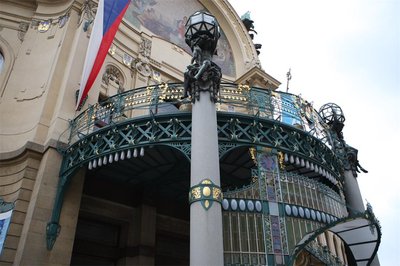 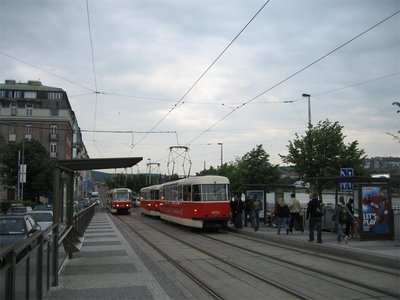 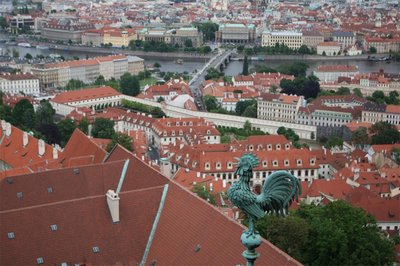 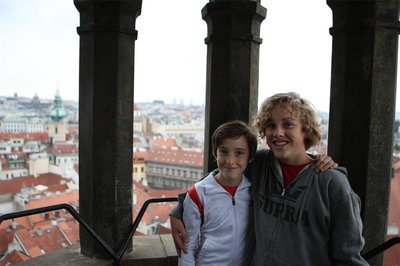 The Vlatava river bisects the city and provides a stunning geographic feature that other European cities must envy. Those same courageous facades preside proudly along the banks of the river, presenting centuries of architectural styles dating back to the 1300s. Our apartment was in one of these buildings, seeming a few hundred years old to us, with 12 foot ceilings, thick moldings, large doors, and old-school double windows. Our windows framed a great view of the river while the balcony sported a view of the Prague Castle and cathedral that perches majestically (or maybe mysteriously) over the city. The location was great with the tram stop and the subway right next door to our building. 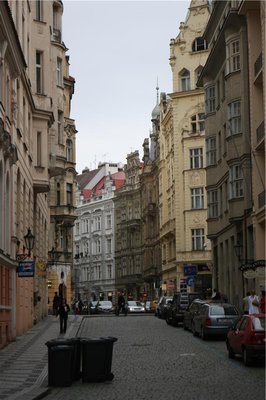 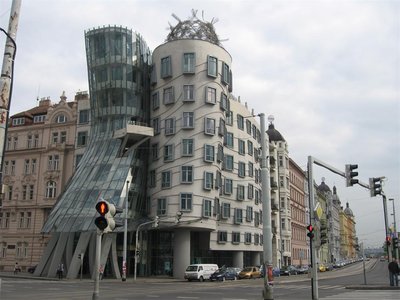 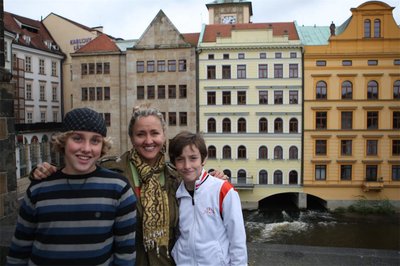 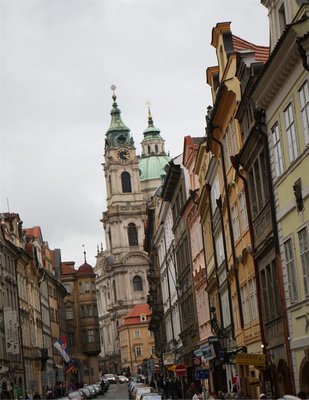 Still, in all its beauty, there is grayness to Prague that other cities we’ve visited didn’t seem to have. Yes, it’s true that it rained and was overcast our entire visit, but this grayness wouldn’t shine in the sun. Now, you might be asking how can you say this after talking about the fantastic colors and the gorgeous architecture, but I think you’d feel it too. This grayness isn’t found in most of the architecture we found in the old sections of Prague. It is found in the lesser travelled areas of the city and in the suburbs. It’s hard to know when you are going to turn onto a street or wander into an area that might be characterized this way, but they are there. A couple of examples follow:

Parker and I wandered out to get train tickets for a trip to Berlin, and we had to go to the central train station to pick them up. We trammed a good distance of the way and then had to hoof it on foot for the rest. Our foot path devolved from cobble stones to mud & rock, and the cool architecture gave way to gray cinder block and cement. We walked through a dimly lit tunnel under the main road, which was the passage to the train station and we encountered a dirty alleyway occupied by a junky tightening a belt around his arm, and shooting up with a hypodermic needle. Others behind him were doing the same. We spun on our heels to find a different way. When we reached the train station, we found completely unlit areas, broken windows, destroyed escalators, with the rubber handrails lying discarded on the ground like earthworms after a rain. Folks didn’t seem to mind it, nor pay it any attention and walked by without even the slightest head turn or glance. Nope, I didn't take pictures.

The boys and I traveled to a skate park quite a few miles from the downtown area through the (excellent) subway system. The skate park was fantastic and maybe one of the best we had seen so far on the trip. I had to wander from the skate park to get some water, and what I found on my short walk were rows and rows of the public-housing-esque cement structures - all the same. One structure contained residences; another was a school, and another, a government office, though you’d never know it. Apparently the personality that defined the architecture in the city never influenced the suburbs. This seemed an intentionally gray place that had been built in an era where folks were not intended to be self expressive, or different, but rather just enjoy their sameness, and the architecture did this era proud. 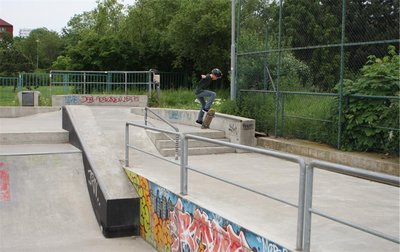 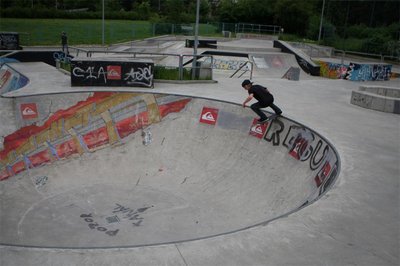 The contrast that we experienced in Prague architecture also seemed to exist in the people of Prague. In the tourist areas, we didn’t notice it so much, but as we spent time in more local areas, we gained a sense that some of the people here were constructed from a different situation, maybe from different materials. Of course the young people seem like young people anywhere, bursting with energy and a healthy ignorance, with their original hair styles, piercings and tattoos, their i-Pods affixed to their ears, and their Quick Silver, Volcom, Levis and Converse attire. Even some 30 and 40 year olds seemed to share these characteristics. These folks seemed like the modern architecture or the brightly washed buildings we ran into in the downtown area. But there was that eerie grayness we noted as well. 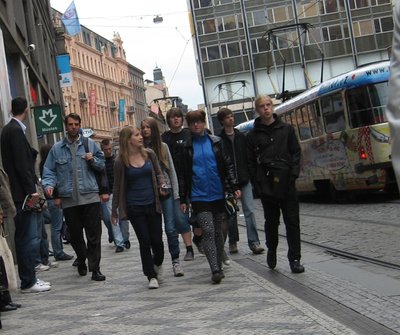 That same grayness that existed in some neighborhoods existed in some of these people. You could see it in their eyes, you could see it in their faces and their mannerisms, and their clothing. There had been a period here where life wasn’t so kind to people, and smiling didn’t come easy. There was a period here, when vaccines weren’t readily available. You can see this on the street. We noticed more than a reasonable number of folks with leg ailments, using crutches to walk. It wasn’t just seniors, but let’s say 50 years old and above. It was strange and made us wonder if polio vaccines weren’t available in some areas or during certain times. The creases warn in the faces of many of these folks showed hard winters and a rough patch in life, like rings in a tree that might show evidence of an ancient fire, or a drought. 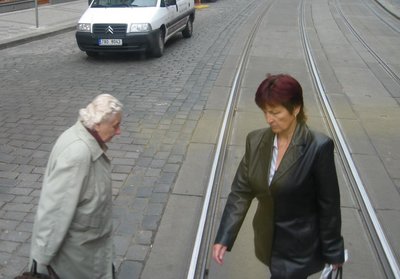 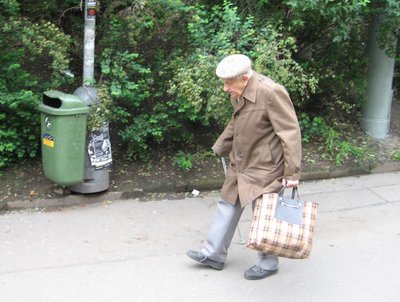 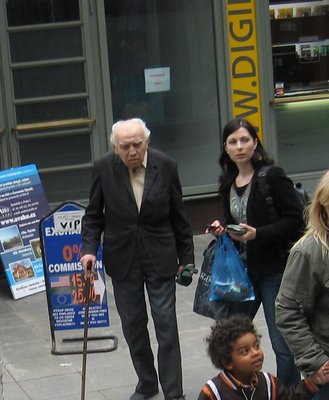 With all that said, we loved Prague and would recommend a visit to just about anyone. The bohemian history is incredible, the architecture of old town and lesser town is beautiful, the river is like a fantasy land, the castle is awe inspiring, and the music and food are great as well. We attended a concert in a church, were treated to a gypsy band (with a jazz dulcimer) over dinner, sampled some wonderful Czech beer, and we ate Czech food all over town that was to die for. This is a great town to tour and unlike any other we had seen. It's so unique, that even Parker was having trouble coming up with comparisons, and that is a rarity. 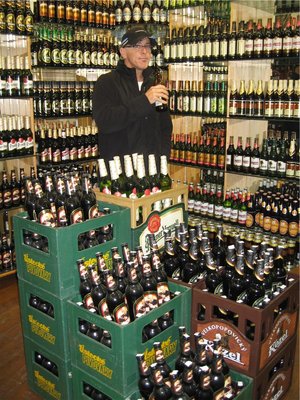 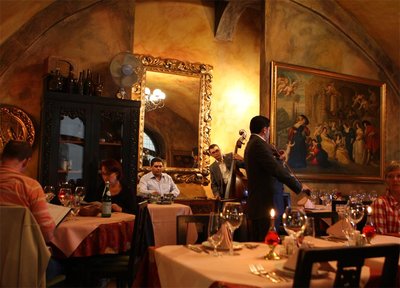 What a story of contrasts; sad yet hopeful. The interior of the cathedral(?) is beautiful! Do you know who designed that awesomely modern building? Now, on to Berlin. (I'll bet seeing the druggy shooting up was scary!