A different kind of history lesson

Berlin was on our short list of cities to visit in Europe. It was on this list for an entirely different reason than other European cities. Istanbul, Rome, Paris, and even Zurich surround you with art and architecture from many centuries ago telling stories of roman empires, wealthy kings or ancient wars. These cities usually are home to two or more instantly recognizable buildings or paintings you’ve seen in a movie scene or book like the Louvre or the Sistine Chapel. Well, Berlin is different. The movie scenes etched in most people’s memories about Berlin are either A) shot at 20 thousand feet, from a B17 as its’ arsenal descended to the city, B) feature Hitler presiding over a parade of goose stepping Nazis or C) showing street combat in a city on fire, or D) an American president tangentially speaking to a crowd of West Berliners, while selling freedom and democracy to Berliners just east of the wall. Yes, the history we came to see in Berlin is different. 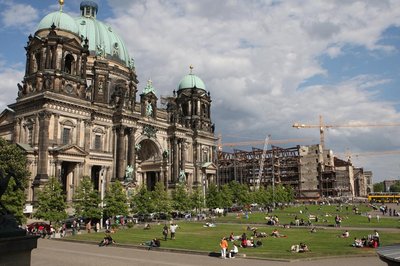 The entire city, if you have a proper guide book is a museum dedicated to World War II and the Cold War. Many monuments and buildings in town have been repaired or rebuilt to match what existed before the bombs fell. Buildings that were somehow spared from destruction are clearly covered with bullet holes and patches to bring them back to life as a government center, museum or office building. Other parts of the city are brand new in a way that feels almost surreal. Potzdamer platz for instance stood as an empty and ruined area around the Berlin Wall only 15 years ago. Now it features stunning modern architecture, the likes of which don’t exist anywhere else in the world in quantity and quality. In fact, what used to be East Germany, spreading from where the old wall stood, seems to be all new. The buildings are modern and beautiful, made of glass and steel, in modern style, and it looks and feels like a brand new city. I guess it is. While the city is renovating older building, they drape a life size façade of the building as it will be when it is completed. Quite a few times you are fooled into thinking it is the real building. I have a shot or two of this wicked and cool trickery. 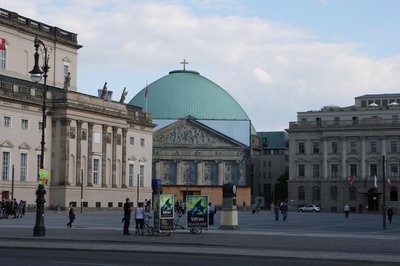 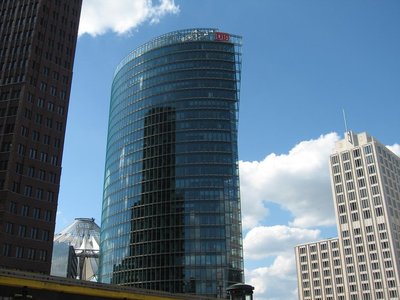 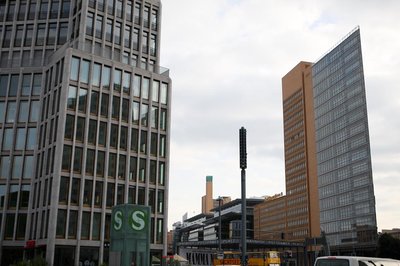 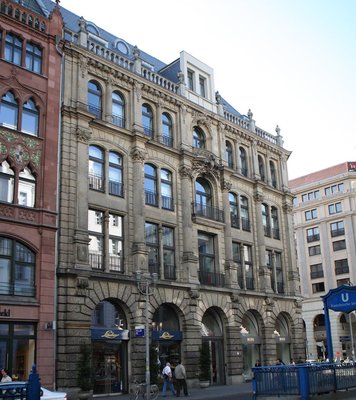 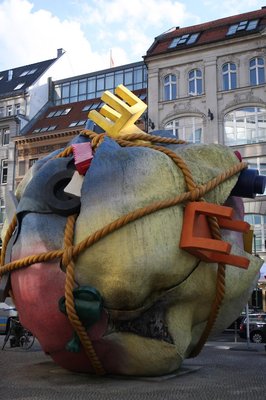 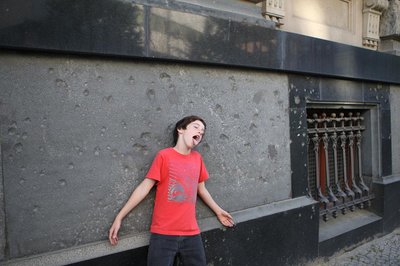 We spent 5 full days in Berlin and were able to take-in heaps of information about Hitler, World War II and the cold war. The government and citizens of Berlin have done a magnificent job of documenting the recent history of the city and the atrocities that were either committed here, or planned from here. Many of the areas feature chronologically serialized story boards that walk you through the history of the city. 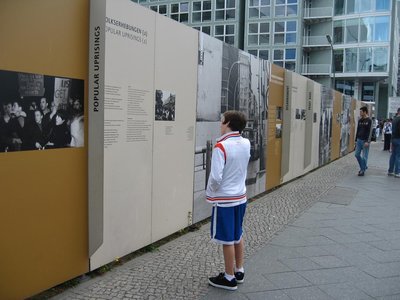 The Topography of Terror documents Hitler’s rise to power and the escalation of the atrocities his government committed, including the war. The Check Point Charlie area and museum documents the closing of the borders between East and West Berlin, the heated cold war between east and west, and the eventual collapse of the wall. The Jewish Museum documents Jewish Life and history in Germany including 1,000s of years of pendulum swinging from apparent integration, to misunderstanding and persecution. The Jewish Memorial documents the atrocities of the holocaust that were planned and ordered from Hitler’s headquarters, just a block away. This museum was probably the most impactful, making the holocaust highly personal, with detailed stories of individuals killed and entire families lost. You can’t help but be deeply affected. This history is so recent and so real, and so impossible, it just drops your jaw. A few people had to leave, because of the intensity of this memorial and children under 14 were advised not to go. As we reflected on the memorial, and walked to the underground to catch a train to the hotel, we walked past Hitler’s bunker, where he committed suicide. Today it is a gravel parking lot – and he deserves no more. Apparently, the German government didn’t want to mark the spot prominently for fear of creating a modern-day neo-Nazi house of worship. 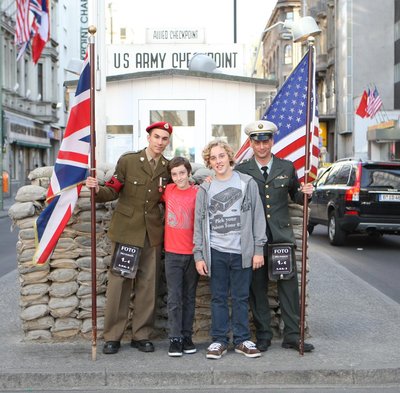 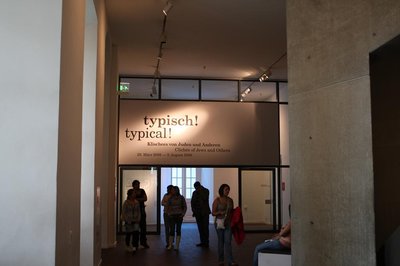 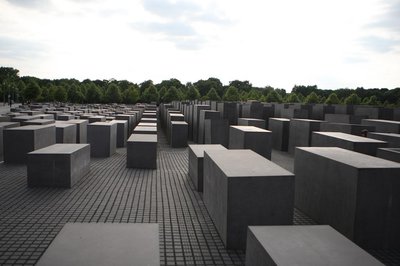 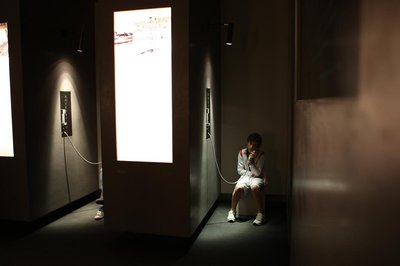 We have found that the best way to get acclimated to a city is to take one of those double decker tour buses from the top deck. We did this in Rome, and thought it would be smart here as well. After a visit to the Berlin TV tower where we could stare down at the city, we took the bus for a two hour loop around Berlin. After our bus ride, we strolled toward the Brandenburg gate, and walked through the Museum Island area, and noticed they were displaying their incredible collection of Egyptian Art. It turns out that the Altes Museum has owned this collection since the early 1900s, and hid it away during Nazi rule. The bust of Nefertiti is included, which is one of the most recognizable pieces of Egyptian art on the planet. 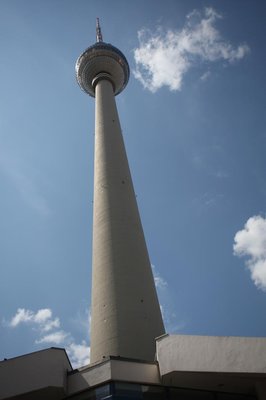 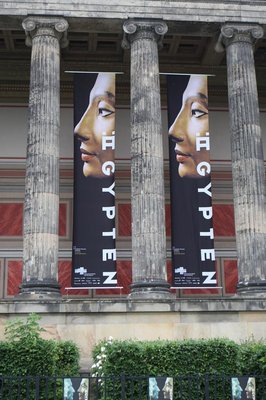 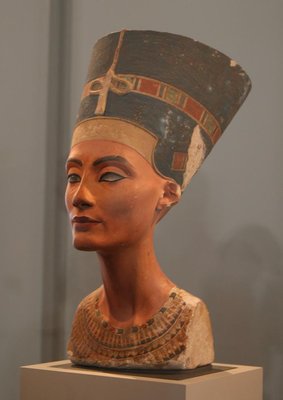 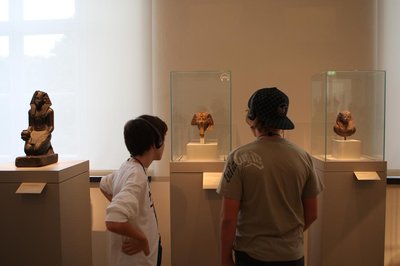 During this same stroll, we ran into another museum of sorts. It was actually a Bugatti dealership just down the street. This museum was displaying a Bugatti Veyron. Passersby stood at the window gawking, while the more brave, walked into the dealership. We all drooled. This piece of artwork has 1001 hp and a top speed of over 250mph, and was until recently the fastest production car on earth. You can own it for a mere $1.25 million, which is much less expensive than Nefertiti. After four days of touring the city, the museums and strolling the streets, the kids had their fill and they just needed to burn some energy. We found a great indoor skate park (the Berlin Skate Halle) on the fifth day and spent a few hours there. 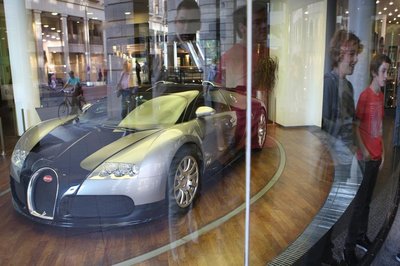 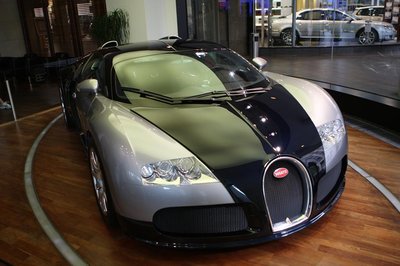 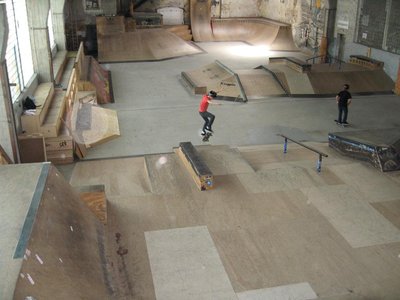 The people of Berlin seemed young and alive, even the people that were clearly old enough to have weathered the storm of a communist regime. Older Berliners had an almost exaggerated youth about them, dressing with style and hipness belying their age. It was a striking difference to Prague where fashion appeared to be something that took a back seat to more basic things. The younger people of Berlin could have been from anywhere along the coast lines of the US. Techno hipsters, skaters, goth punks, preppies, and dreads could be found all over town, though most appeared to stay within the confines of their neighborhoods, mixing in some of the busier train stations and squares. The people of Berlin also ALL seem to have taken English as a second language. Their English speaking was extraordinary, and I was once again embarrassed by speaking only it, and only marginally better than the locals. “Excuse me, do you speak English?” One of us would ask a Berliner as we pondered directions. The Berliner would first apologize for their poor English, and then put us to shame by providing detailed directions in perfect English. We goofed around every so often to break up the museums and lighten the seriousness of the subject. 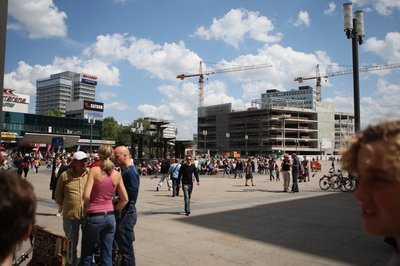 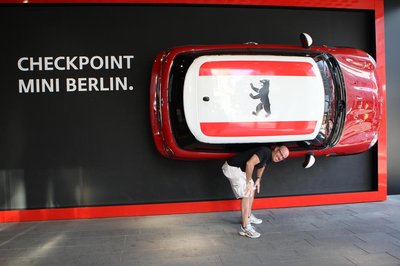 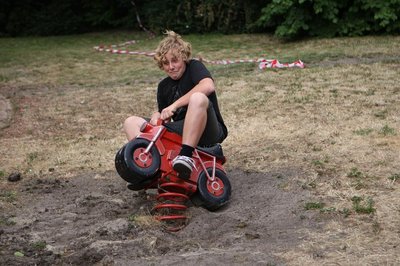 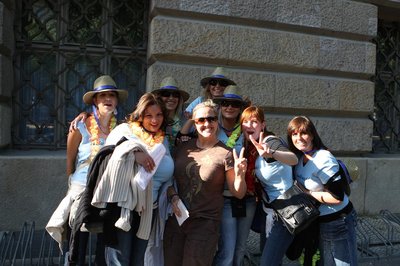 By the way, if you’re staying in Berlin with your family, or just for business, we found our hotel to be excellent and quite reasonable. After feeling a weak dollar in Rome and Zurich, we were prepared for the worst. The hotel (Großer Kurfürst) rocked and was set up really well for a family of four with a kitchenette and two separate rooms. It was even next to a subway station (U4 Märkisches Museum) that shuttled us all over the city when places were simply too far to walk.

I'm glad you had some fun in Berlin too. Some somber things to learn about. An indoor skate park; wow! A good hotel too!

Your mother just advised me that I am geezer 3 and she is geezer 2, but she goofed. Great comments om Berlin equaling your comments om all of your travels. You should write a book.
Geezer 3 (fingers still domn't work).