The city of acceptance..... and bicycles 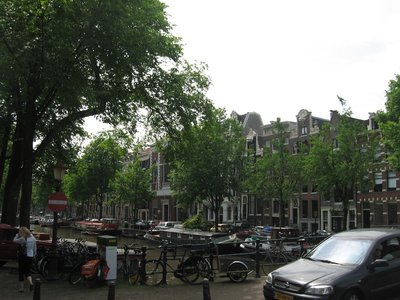 There are so many things for which Amsterdam can be uniquely remembered. Maybe you remember the lovely little canals and waterways that arc through the center of the city, or the lovely parks, or the incredible museums that exhibit Flemish masters and Dutch impressionists. Or perhaps your Amsterdam was a bit wilder and you remember the red light district which provides a business address for the world’s oldest profession, or the wide assortment of tattoos and piercings that adorn so many, or perhaps you remember the coffee shops that serve so much more than coffee. Regardless of what you remember about Amsterdam, you will sense that this is a city of tolerance. Amsterdam residents seem to embrace an “it’s all good” attitude with casual indifference shown by businessmen toward a man with tattoos covering his entire face and body or a woman smoking marijuana, while all stand in the same queue at the ATM or the Rijksmuseum. Even a man and his closest companion sharing a beer at a café… We’ll it’s just unremarkable. 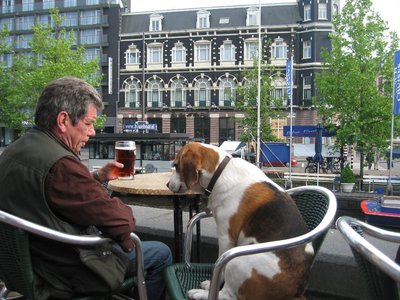 Amsterdam residents also embrace the bicycle. Amsterdam could be the only city in the world where the bicycle is used as a structural element. The city seems to be held together by them. Bicycles lean with rusted locks on buildings, fences, bridges, trees, posts, railings, stop signs, and each other, not to mention the thousands of bicycles stacked one on top of the other by the thousands in official parking lots. I swear that if all the bicycles were removed, buildings, bridges, fences and trees would simply fall over. Almost all bikes are black and nondescript, ride on thin tires, have one or three speeds, and are adorned with hardware for carrying groceries; children or both, and of course a “bell”. The streets are full of moving bicycles, with their riders peddling quickly and with purpose, knowing exactly where they are going and when they need to arrive. And unlike the “it’s all good” attitude that radiates this friendly city, “its all good” disappears when the locals straddle a bike. There are strict rules for riding bikes in Amsterdam and all the locals know ‘em and follow ‘em. Do not get in their way. 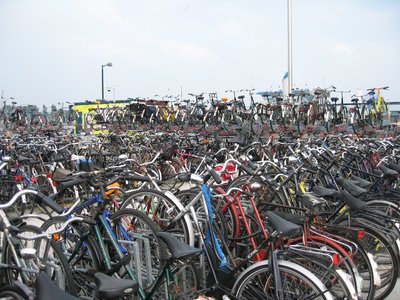 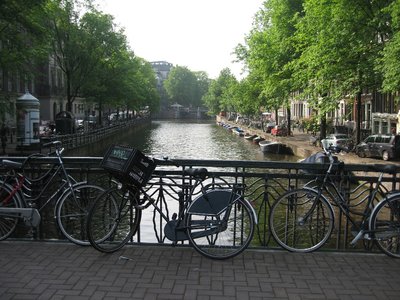 We rented four bicycles for the duration of our stay and learned the rules as we went – the hard way. We learned that the bike lanes are like freeways with strict laws and hefty fines if you don’t follow the laws. For instance, if you are cycling in the wrong direction in a bike lane, it could cost you 80 euro if you’re caught. We biked just about everywhere and got better by the day, but we all had close calls and narrowly missed being hit by locals’ bikes or fines. Still, the only real way to experience Amsterdam is on bike, and I wouldn’t change a thing. In the end we loved it, in spite of the look of apprehension (and sometimes terror) on our faces as we rode. Our bikes were bright red instead of the usual black, and I think it helped locals identify us as a moving and dangerous obstacle. When you blend in as best you can on a bicycle that says “RENTAL” and enjoy yourself. 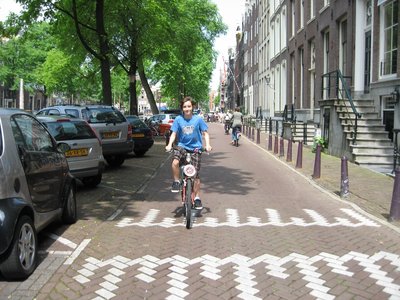 We stayed in a great little flat on a street known as P.C. Hoofstraat. We were surprised when we arrived, because it seemed from a brand perspective to be the Rodeo Drive of Amsterdam. It is. The street is all designer brands, with the Chopard and Roberto Boticelli stores under our flat. Out flat was on the fourth and fifth floors of the building and the stairs were the steepest we had ever encountered. I swear the treads were more like a ladder than a stair, and getting our rather large luggage up (and down) this thing was no picnic. The flat was very nice and we really enjoyed it, with a great living area, and two bedrooms. As it turned out, the location was fantastic as well, being only 5 minutes walk, and two minute ride, from the Rijksmuseum, the Van Gogh Museum, and the craziness of the Leidseplein. Of course going or coming we would window shop. 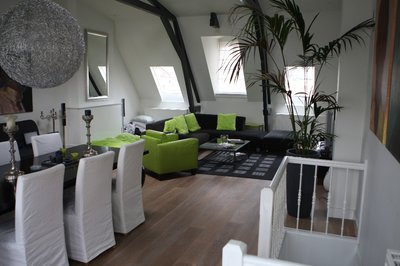 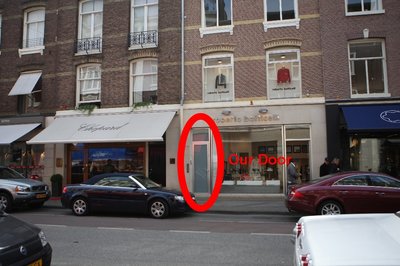 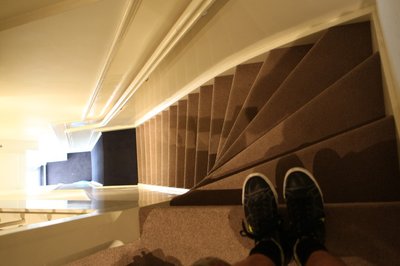 We did visit the Van Gogh and Rijksmuseum and both were very good. The Van Gogh was quite something if you like either Van Gogh or Gauguin’s work. Paul and Vincent were very close friends and they do a great job of educating viewers of the closeness of their relationship. For instance, one thing you may not know: Vincent cut off his ear after an argument with Paul. He didn’t cut it off as a gift to his girlfriend as folklore suggests. There are significant pieces of work at the Museum that you already have etched in your mind. Whether your favorite is the sunflowers or a Van Gogh self portrait, it is worth spending a few hours here. The Rijksmuseum was undergoing a significant renovation so most of the 230 rooms weren’t open, but they had moved most of the significant pieces to a small annex that took about two hours to go through, and it was perfect. Rembrandt, Vermeer, Hals, Steen, and so many other incredible Flemish painters who make light seem like a surreal element in realist paintings that depict objects so perfectly and naturally. We spent about an hour in the Rijksmuseum before a fire alarm went off and we all had to leave. We returned after lunch and spent another hour. I could have spent days there (the kids not so much). I was surprised to see that Griffin really got into it. The realism is incredible, and the stories on the audio track are wonderful making it easy for adults and kids to dive deep into the paintings. 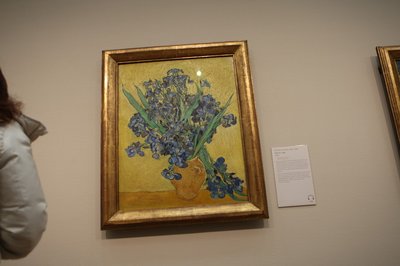 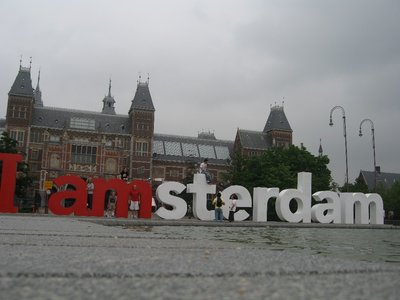 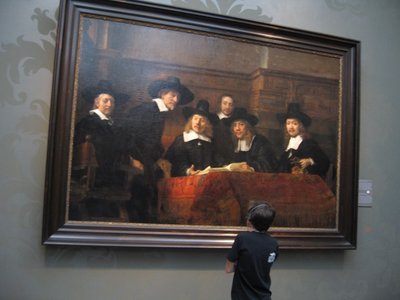 As a school assignment, Carol had the boys read Anne Frank. There is a new edition out that is much longer, (350 pages) but it gives a much clearer picture of who she was as a person. (She was mad at her Mom a lot and was interested in boys). If you’ve read Anne Frank, you would know that she and her family hid in a house in Amsterdam for two years during Nazi rule. Ironically, the Franks fled Germany to escape the Nazis, only to be found in Amsterdam by the same regime. All were killed in Auschwitz, excepting Anne’s father, who survived and then discovered her diary, eventually publishing it. It is now required reading in many schools. The Frank’s hidden house is now a museum and through it, you can share the experience of the family through those last two years of Nazi rule. It was very moving, especially after visiting Berlin and having the context of Hitler’s regime made clear to us. It’s incredible that a family could withstand being shut in for two years in this environment without ever leaving. Their only contact was with a few close friends who ensured they had food, books, newspapers and clothing. This museum is a must see. 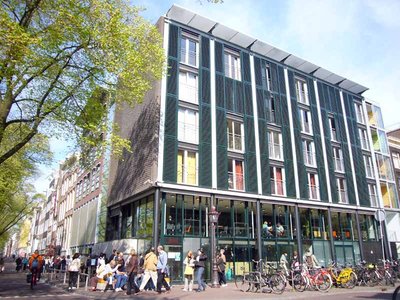 As we were biking to the Anne Frank house, Carol saw an advertisement for an exhibit of the World Press Photography Award Winners. After we visited the Anne Frank House, we cruised around neighborhoods, had lunch and eventually found the exhibit. The exhibit was being held in the Oude Kerk Church dating from the 1200s. To experience the church among the modern day photographs of front line journalists was a surreal contrast. We were walking over the crypts of Dutch history while viewing photographs of atrocities in the Congo, wars in Afghanistan, fighting in Kenya, and a shocking portrait of Vladimir Putin from Time’s man of the year cover. Incredible. Also incredible: This church is in the heart of the red light district, but we managed to weave our way in and out with only “alley entrance” glimpses of this infamous district. 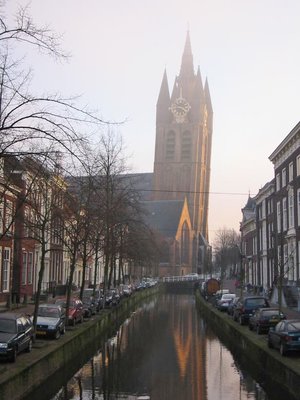 Parker had his fourteenth birthday in Amsterdam. Of course what did he want for his Birthday? He wanted to be 18 years old, because it seems much of Amsterdam is geared for adults, which is pretty apparent even to an 11 year old. But he settled for a visit to a skate park. We found a skate park that was in North Amsterdam, which we had seen on the web and been tracking since Ghana and now we just had to find our way. We rode our bikes to the central train station, locked them up with the thousands of other bikes, and then took a free ferry to Northern Amsterdam where there were no tourists, and when someone speaks English they sound like Gold Member from Austin Powers II. “You are the boys Fasha?” It seems that everyone in Amsterdam speaks great English, accent or not, even out in the suburbs. Even the five year olds at the skate park could make me feel semi-shameful for speaking only one language. The ferry trip was pretty cool and we were greeted by a submarine breakwater when we arrived in North Amsterdam. The skate park was a nice indoor park, and Parker had a very nice birthday skate session. Later that night, we celebrated at the flat with a few small gifts and a few rain checks for some stuff from home. He is now 14. God help us. 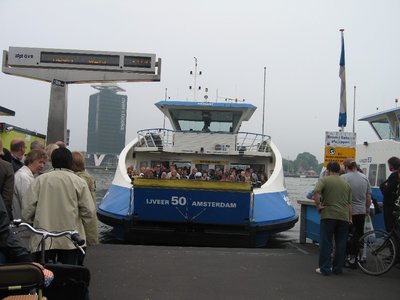 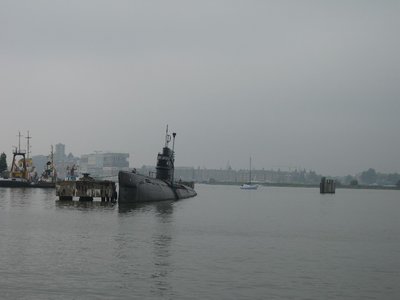 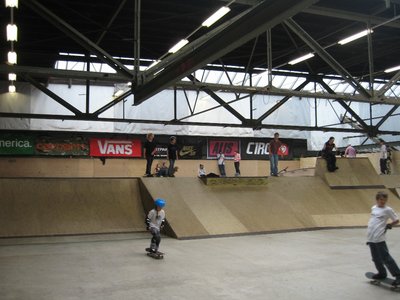 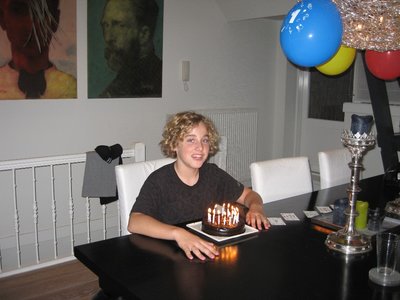 Ahhh, I can tell you are now 14 Parker. You look so much older!! Amsterdam seems like a pretty interesting place to visit. Love those bicycles!
Love, Grandma

Hiya Irving family - as much as this must have been a life altering experience for you all, I am sure that you are just itching to get home.
Blake your blog has been tremendously entertaining - well done for keeping up the quality writing and photography.
In a bizarre coincidence Candy and I arrived in Amsterdam on Saturday 7th, but only saw your blog after you left (but in case you're getting spooked, we didn't follow you to Paris!
We used to live in Amsterdam and had a wonderful time (in wonderful weather) reacquainting ourselves with the city.
Enjoy being home (I hope you remember where you left the key)
best
John and Candy