Attention deficit disorder in the city of light 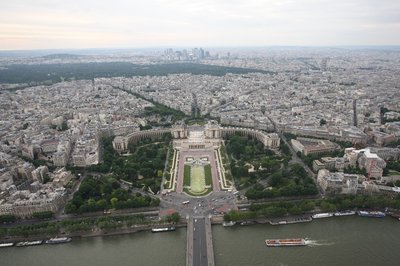 Do you remember the last week of the school year when you were a kid? Do you remember any of the work you were assigned or the things you accomplished? You probably don’t remember because you didn’t accomplish anything. That’s right, nothing. Your memories are probably of the warming weather and playing outside, and when you weren’t playing outside, just thinking about playing outside. Your teacher knew that your attention span was dwindling as the last day of school approached and she didn’t dare assign you anything, knowing that you would crumple in a heap if you were asked to focus for more than a half hour. That, in a nutshell was Paris. This was our last week of traveling, and the kids were so excited about getting home, that they could barely focus. Carol and I weren’t much better. The final countdown to the USA had started, and like elementary school teachers at the end of the year, we needed to tailor the curriculum.

Over the course of the week, we did our best to tote the boys to the major sites in Paris in a “cliff notes” style, that would allow them to visit the major sites, but never feel overloaded. We tried to balance visiting historical or educational sites with burning off their energy and serving their diminishing attention spans. One day we took the double decker tour bus to reacquaint ourselves with the city layout, but then walked home for more burn. Another day we walked to the Musee d’ Orsay and headed straight to the impressionists for a thorough scrubbing and then promptly left. On another day we visited the Louvre and headed straight to the Mona Lisa, prefacing that with some Leonardo, and finishing with the large format French painters from the same era. We were in and out of each museum in less than two hours, but saw a bunch of art that the kid’s recognized as we tore through them. 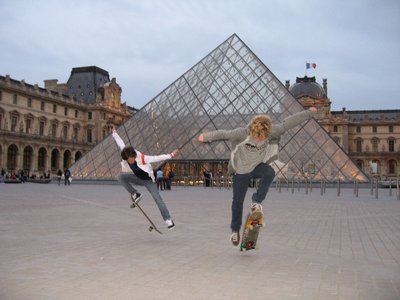 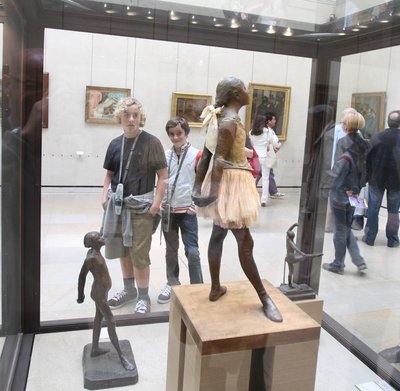 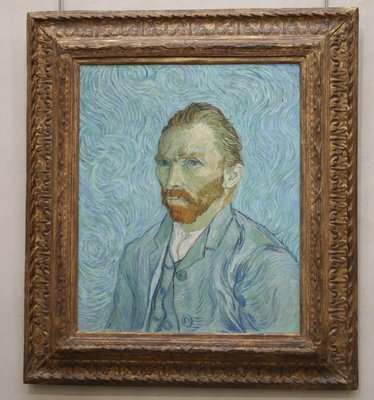 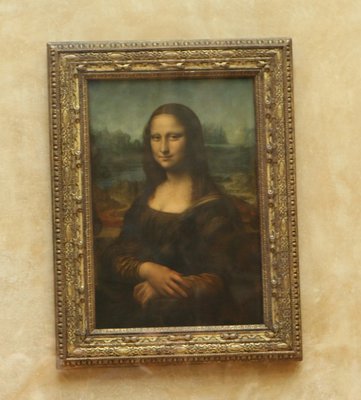 We took the Metro and RER everywhere, and had the boys navigate for a few days. The boys decided the itinerary one day and took us to a skate park at the end of the number 12 metro line, then after skating they took us to the Eifel Tower where we took the elevator to the top, and raced down the stairs to burn some energy. On another day we visited Notre Dame pretty quickly and took the walk (or run) to the top which was fun and tiring (400 stairs). The curriculum seemed to work. 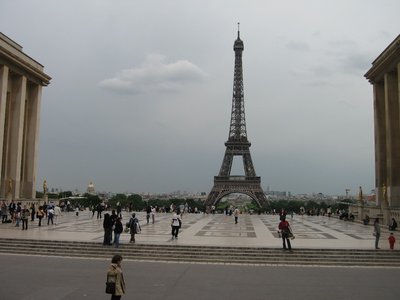 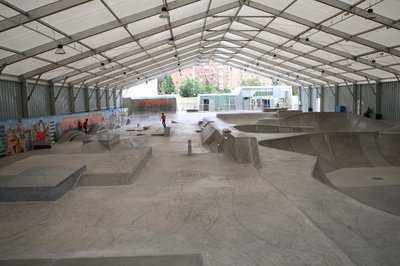 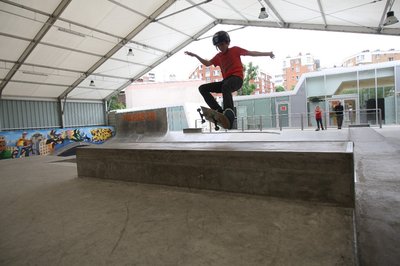 Perhaps the oddest experience we had in Paris was at Notre Dame as we were enjoying a drink and a crepe at the café right next door. Apparently, someone called in a “bomb” as they noticed a lone and un-owned bag next to the church. The bomb squad arrived and cleared the street… and unfortunately all of the folks sitting at the café as well. We moved just a short distance away with our drinks and watched as the bomb squad carefully detonated a lethal bag of what appeared to be lettuce, fruit and milk. Actually, we didn’t stick around to see how the whole thing turned out, but the funny thing about the whole ordeal was that Carol and I were in almost the exact same place two years ago when a bomb was called in as well. A bomb scare… ooooo!! It was adventure, and perfect for the a-d-d curriculum. 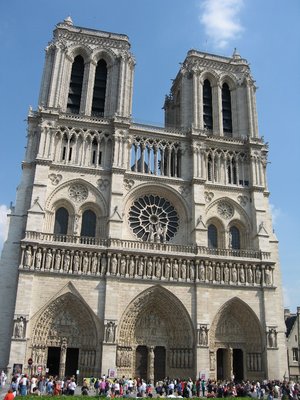 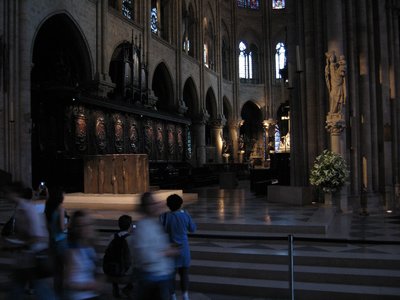 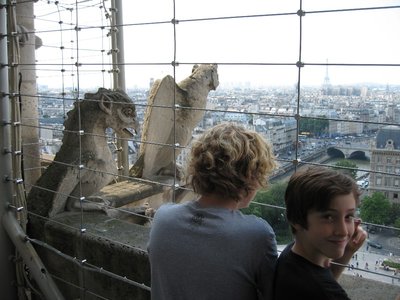 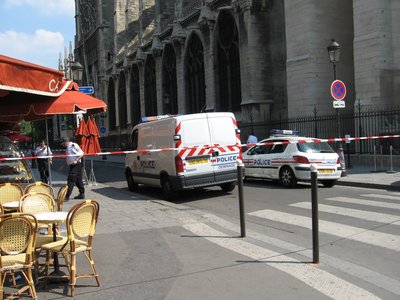 A couple of random things that we noted in Paris that are worth mentioning:
The people were wonderful. You have all heard about how terrible and rude the people of Paris are. I’ve been here many times before and actually formed that opinion myself, but we found the opposite to be true on this trip. People were gracious, funny, charming, helpful and nice. I don’t know if there is a new sense of world citizenship in Paris, or maybe because we had kids in tow, but this didn’t feel like a place that is filled with Elitists. It felt more like a melting pot of nice and casual people that all spoke French, but were keen to try and speak English as well, and ready to mix it up with you, if you were willing.

Parisians love their dogs, and you will find their pooches in restaurants, subways, and even on scooters, and you know what, you didn’t see any evidence of dogs besides the dogs themselves (read no doggy doo). We had a dog (named Toto) sitting right next to Griffin in a charming little café and the owner let the dog sit right between her and Griffin. The dog eventually put his head on Griffin’s lap. The dog was so incredibly well behaved, it caused us to reflect on what Jasper (our dog back home) would be doing in the same restaurant, which would have been overturning tables, and franticly licking plates and faces. Yes, dogs and their owners are different in Paris. 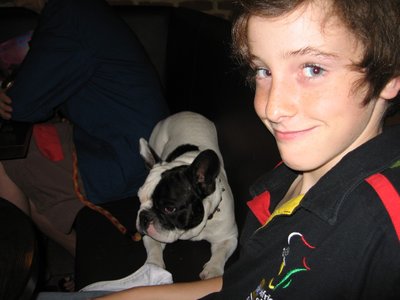 Paris has a new bike program where folks can provide a credit card and pick up a bicycle at many places around town. The bikes are racked up in electronically controlled racks. You simply pick one up at one bike station and drive it to another bike station when you are done with it and put it in the rack. The system is all electronic and bikes look pretty darn nice. We’re not sure what the cost is, nor the details of the system, but it sure seemed like a super friendly solution to a tough environmental problem.

The metro is awesome. They have improved the signage and maps at the Metro stations and getting around is an absolute snap. We metro’d everywhere and only used a cab once the entire time in Paris. The Metro made our a-d-d touring possible and made Paris the perfect city to be our last on the trip. The metro is super fast and convenient, and an inexpensive way to get around town. Do be careful though. The seats by the doors fold up automatically if you rise up for just a second, and if your 14 year old doesn’t hold it down for you when you sit back down, you will fall on your ass and make an extremely loud noise. (which is what just happened to me in this photo). Yes, you will catch the attention of every Parisian in earshot. And yes, I was embarrassed. 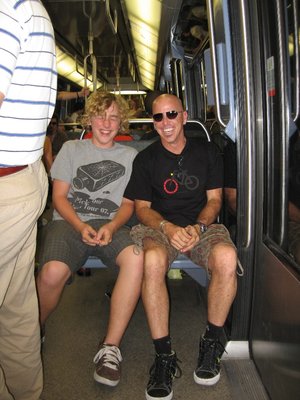 Our apartment was in the first arrondissement near the Louvre. It had to be a few hundred years old, but it had been renovated pretty well, had a serviceable kitchen and bath, comfortable beds, a TV set, and Internet. The location was awesome with the Concorde and Madelline Metro lines only two hundred or so meters from the house.

We were told by a good friend of ours, John Turner, that we absolutely must go to Normandy France to see where the allies landed during World War II. He was adamant and convincing, so we strayed from the A-D-D curriculum one day and headed to Normandy to visit the D-Day landing site. It was a long 300km drive from Paris and we hired a tour company to take us there. The guide and driver’s name was Didier, and he was a nice and quite Parisian with a quick dry wit and quite a bit of knowledge about the sites in Normandy. This was a long day to say the least, but our most rewarding in during our Paris stay.

Having visited the museums and historic sites in Berlin, as well as the Anne Frank house in Amsterdam, this was a great way to tie it all together. First, let me say that the Normandy coast is a stunner. It is gorgeous, and it is hard to imagine heavy fighting and dying soldiers in the hills and on the beaches only 60 years ago. But there is proof all around you. D-day happened on the 6th of June, and we were lucky to be in Normandy on the 8th, just two days after the anniversary. Normandy was still being toured by World War II veterans and historians, wearing and driving memorabilia from the WWII era, which was very cool. We arrived at the British museum and the site of the artificial harbor that was built by the Britain. It was remarkable. Very few of us Americans know that the British actually built an artificial harbor. They built it in complete secrecy in Britain, then towed it (huge cement barriers, spans of bridges, and roads, etc..) across the sea, and then sank the cement barriers in the shape of a protective harbor on the Normandy coast. In 12 days, they created platforms for unloading troops, vehicles, tanks and supplies, and built floating roads to connect them and the mainland. It was an engineering feat I’m not so sure we could accomplish today. They unloaded 2 million men and supplies here. We all know that D-day was the start of the end for the Nazis, but few of us know that it was this harbor that allowed us to pour in the resources to win the war. We were all absolutely blown away by the scope of what was accomplished in the name of liberation. We also visited the US Memorial at Omaha beach where over 9,000 soldiers were laid to rest. This visit was beyond moving, and we all held back tears as we walked above the Omaha cliffs, among fallen soldiers. We noticed a few Jewish stars among the thousands of crosses, making the connection to Berlin and the Jewish Memorial so very real. 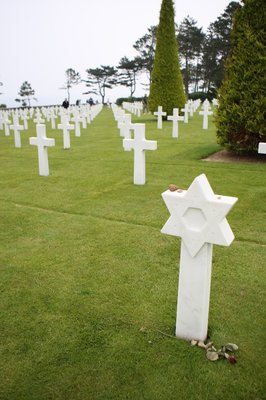 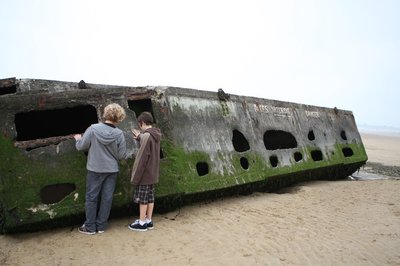 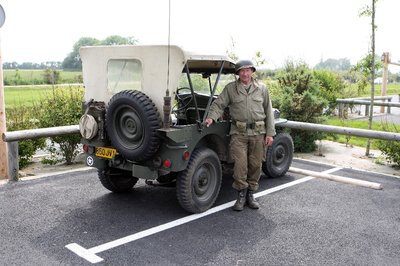 Finally we visited the battlefield at Pointe du Loc, where Army Rangers captured the large guns that were pummeling the Omaha and Utah beaches. Machine gun bunkers are still visible in the hills, as are big gun placements, where Canons with a range of 8 miles once menaced. The kids played in the deep craters and fractured cement bunkers that spread over the area, serving as evidence of heavy shelling from allied planes and war ships. The long drive back to Paris lead to conversations about how this visit tied up all the loose ends and unresolved feelings about what we had seen in Berlin and Amsterdam. As Griffin probably said best, we had visited the places where all the madness had started, and had finally visited the place where the free world shouted “No More!” We were apprehensive about the drive, but were so very glad we made it. What an incredible experience. 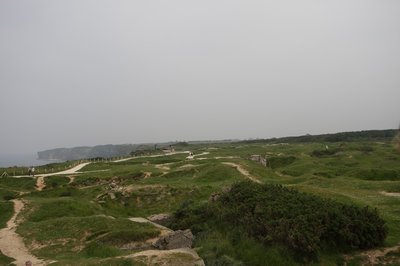 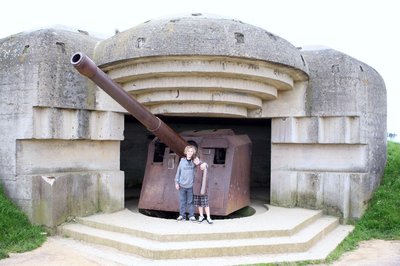 What a dramatic end to your odyssey! I remember so well the drama that unfolded when the landing at Normandy occurred. I didn't know the extent of the planning involved however. War is hell, wherever it is taking place on this planet, and you saw the 60-year old evidence of it. The earlier part of your French visit was wonderful too, but in a happier vein. Loved the entire blog, and my part in it.