Today was really our first day to get out and experience the city with Rebecca, our guide. It was packed. We had lunch with a local family, a visit to a small elementary school, a walk through the Forbidden City, and then across Tiananmen Square.

The lunch was in the home of a gracious local family who prepared a meal for us that was the same type of food they eat day to day. It was charming and delicious with rice from the north (fluffier than what you're used to in the states), cauliflower in a tomato sauce. Who would have thunk it would be so yummy. And the boys were shown how to make dumplings which proved much harder than it looks. 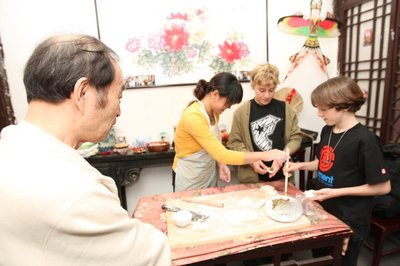 The school we visited was a local elementary school. The grounds were pristine, with shiny little red polka dotted trash cans all over. They were shaped like mushrooms designed by Willie Wonka. Above many of the trash cans, were communist philosophical sayings like “we are better as one” and “strenuousness makes good achievement”. After we walked around the playground, which had a long line of ping pong tables and an Astroturf basketball court sprinkled with white sand, we were invited to visit a fourth grade class. The students were wonderful; friendly and shy at the same time. They could choose to introduce themselves in English. (all students in china start to learn English in the 3rd grade) Their diction was excellent and punctuated with a crispness that makes consonants pop, and vowels smile, and they all said hello (never hi) and some said Hell-o, my name is “your name here” and I like to watch TV and play table tennis. 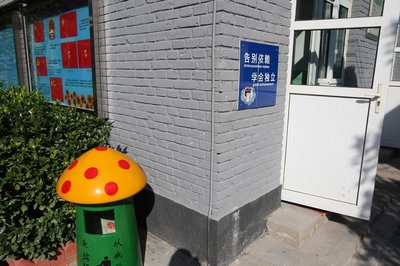 After a short rickshaw ride, we arrived at the Forbidden City. Wow… A sentence can’t describe it well. Massive. City… Palace... Compound... House... with the juxtaposed contrast of tiny bedrooms and dining areas struggling to maintain some essence of feng shui. This would be something to see on MTV Cribs. The buildings were ornate with beautiful ceramic tile and stonework. It was built in 1420 for the Emperor. His wife, concubines, and a few men sans their private parts also got to live there too. I have never seen such a grand statement to power. 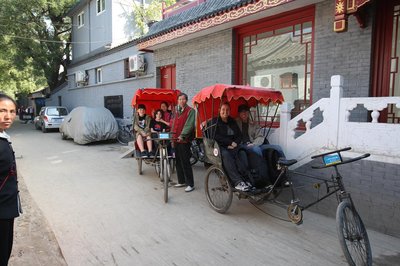 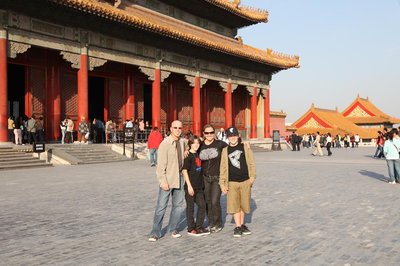 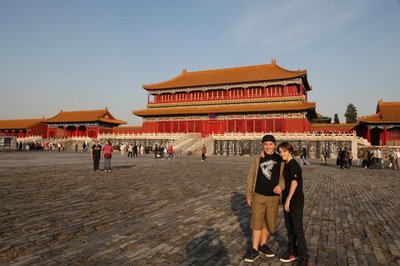 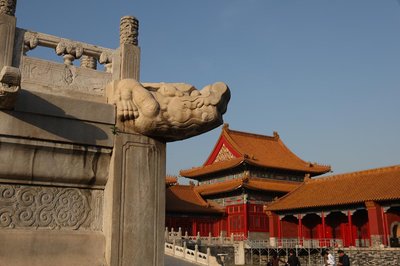 As you leave the Forbidden City, you walk through an arch under the smiling face of “the chairman”. Walking toward Tiananmen square, you look over your shoulder and see the huge painting of Mao which is so infamous. It is hung high on the south wall of Forbidden city looking out over Tiananmen Square. It too is quite a statement. It’s about 28 feet tall and is changed every few years so it always looks new, and he always looks young. Pictures of the painting don’t capture the scale. (We’ll add a photo to show you <g>

. It was a Chinese holiday marking the beginning of the cultural revolution, and people were everywhere taking photos of themselves in front of Mao’s. There were also lots of police and military men (no women) everywhere. There was quite a contrast between the smiling Chinese citizenry with the grim and sober faces of the larger-than-usual military force. 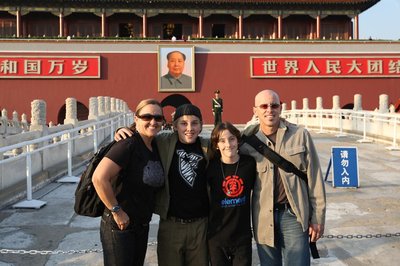 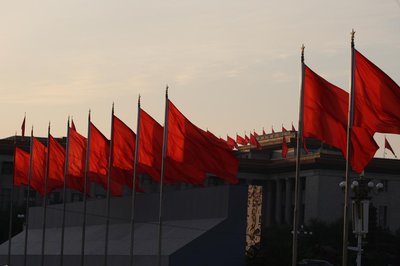 We walked under the street to Tiananmen, and then left the square for dinner. A loooong day.